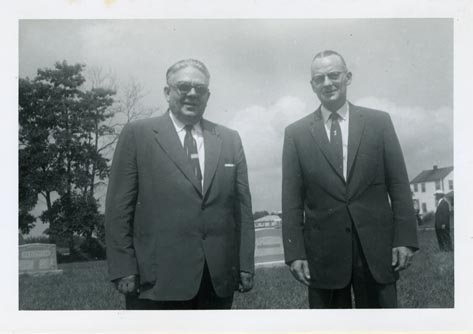 Carroll Lee Cropper became Boone County Judge in 1942 and served for the next twenty years. Cropper was born in a farm house near Bullittsburg Baptist Church in 1897 and graduated from Burlington High School in 1916. He served in World War I and after returning settled on his family farm, eventually becoming a cashier at the Boone County Deposit Bank. He served as a State Representative for twelve years beginning in 1934. Upon the death of Judge Nathaniel E. Riddell in 1942, Cropper was appointed to finish the unexpired term. The next year he was elected to his first full term. The position Cropper held is the equivalent of today's County Judge/Executive. Prior to the reorganization of county government in the early 1980's, County Judges in Kentucky also had judicial powers.

During his terms in office, Cropper witnessed Big Bone Lick becoming a State Park, development of the airport now known as Cincinnati/Northern Kentucky International Airport, and the construction of Interstates 71 and 75. It was during Judge Cropper's terms that Boone County began its tremendous population growth. In a Kentucky Post interview in 1974, Cropper said “I'm not against progress, but I actually hate to see farms turn into subdivisions. It spoils the nature of the County. A lot of people are going to want to come here.” How prolific his prediction seems to be! During his twenty years in office, Judge Cropper saw the County increase in population 250% from approximately 10,000 to 25,000.

A Democrat, Cropper served as Boone County Campaign Manager for Franklin Roosevelt's first campaign for the presidency in 1932. He also served as chair of the Boone County Democratic Party. Upon his retirement in 1962, Judge Cropper became President of the People's Deposit Bank and five years later Chairman of the Board. Between 1901 and 1982, Cropper was one of only four long-standing Judges in Kentucky.

Judge Cropper died in the year of America's bicentennial, 1976, and is buried along with his wife Kathryn in Bullittsburg Baptist Cemetery. In honor of his service, the I-275 Bridge between from Kentucky and Lawrenceburg, Indiana was named the Carroll Lee Cropper Bridge upon its 1977 dedication.