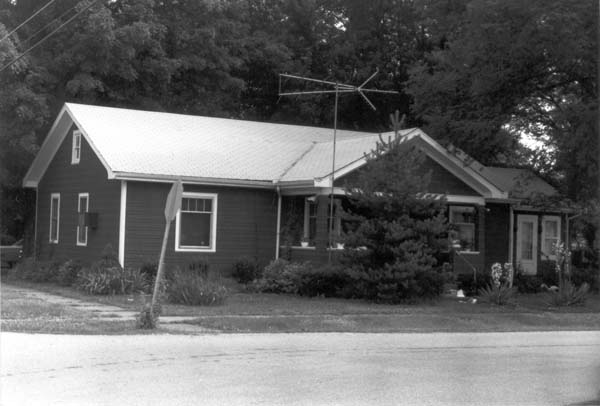 Located on First Street in Petersburg, this Craftsman dwelling’s low, broad, rectangular form represents a marked departure from the boxlike shape of the typical Boone County bungalow. The walls are faced with wood shingles overlapped in courses alternately wide and narrow: a favorite device of bungalow builders. At the east end of the house is a small, one-story gabled wing that may have served as Dr. Love’s office.

Dr. Eugene Joseph Love was born in Fayetteville, Brown County, Ohio on June 15, 1904. He was the son of Dr. Eugene Waldo Love and Mary A. Carboy. Dr. Love and his wife, Alberta Nove Sheldon, from Dupont, Indiana, married around 1925 near Cincinnati, Ohio and were living in Petersburg, Kentucky by 1930. The couple had at least two known children, Eugene W. born December 2, 1926 and John Paul born February 28, 1935. John Paul died in 1937 in Ohio and is buried in the Petersburg. Dr. Love practiced in Petersburg until his death August 7, 1949 of a heart attack in Cincinnati. He is buried next to his son, John Paul. Little is known of the family after Dr. Love's death. Son Eugene, died in 2006 in Kenton County, Kentucky.