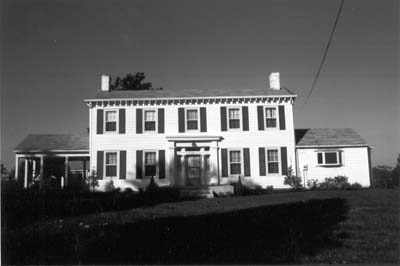 The Morris Lassing House is an interesting study in stylistic evolution. The original house is a dogtrot log structure, possibly built in two stages by Morris Lassing in the 1820's. During the 1840s or 1850s the house was raised to two full stories with frame construction, and a rear ell was built. Greek Revival embellishments also were added, including a four-panel door with Doric columns and three-part transom, and a modillioned and bracketed cornice. A 1940s remodeling added flanking wings, giving the house a three-part form, and a new ell.

The Lassing property is also an excellent example of a large farm, with a large group of outbuildings dating from the mid-19th through mid-20th centuries. Behind the house stands a brick smokehouse with bargeboard trim.

Lassing was a Bavarian immigrant who bought 110 acres of land near Union and established a farm. The farm remained in the family for several generations and was added to the National Register in 1989.