Romance is a popular theme in our culture, just behind murder and mayhem, or politics, it seems. In a time before television and the internet, our thirst for love stories could be sated by thumbing through the newspaper. Though there were countless love stories, sonnets and poems available, there is something appealing about stories of contemporary “real life” love. This is where the press came in handy.

In some cases, this type of human interest story might be something for the slow news day. Was it just filler or was the goal broader? In some instances, the stories of the love struck were just that: plain and simple courtship reports. Sure, it was gossip, but well-received, nonetheless. As the number of newspapers increased, competition dictated the need for a more unique slant on life: something to keep the interest of the weary subscriber. 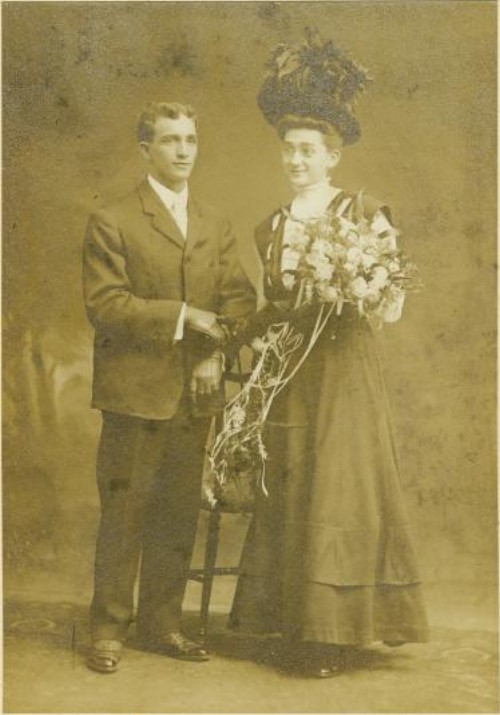 One such love story ran in the Indiana Progress, from Indiana, PA, back in 1871. The headline “The Wedding of Giants” was a real attention grabber, and the subsequent article didn’t disappoint. The groom was a Boone County native by the name of “Captain” Bates, who reportedly stood at about eight feet tall, and weighed in at 400 pounds. His blushing bride was of comparable size, though the article indicates that heels would not be an option at the wedding, as she vertically out-sized him by a few inches.

Along the same vein, a distinctive couple from Rabbit Hash was wed in Rising Sun, Indiana in 1899, as reported in The Columbus Republican, Columbus, Indiana. The 62-year-old bride was a diminutive woman of under four feet tall, weighing around 100 pounds. Her betrothed was a man half her age and twice her height and weight! The Evening Chronicle of Charlotte, North Carolina took a more romantic approach. In 1913, an article ran telling the timeless tale of two lonely hearts who found one another. In the story, a man from our own Constance, KY found a bottle floating in the river, with the name and address of a woman in West Virginia who sought a pen-pal. He responded, and the correspondence ended at the altar.

The Cincinnati Enquirer aimed for the emotional reader with a story about tears shed at the altar. This 1904 ceremony was not what most would expect, however. In the case of this couple, the bride remained calm and serene, while the groom was overcome with tears of joy. The couple, hailing from Verona, had eloped to Cincinnati. The young groom was apparently so relieved to seal the commitment, the tears just flowed. Does it get any more romantic than that?