This is the first entry in Lewis Loder’s diary, which he kept from 1857-1904. Loder, Justice of the Peace in Petersburg for 40 years, had a ringside seat to many of the interesting events of his river town, which was in its prime during the time he lived there. 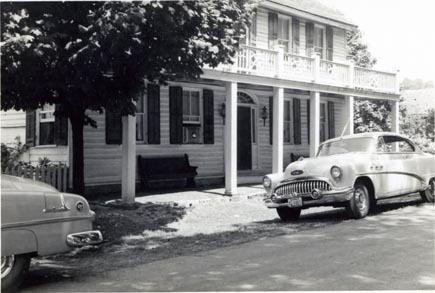 Loder kept track of everyday events, such as weather, births, and deaths, but other entries are quite remarkable. In a town of nearly 600 people (the largest in the county, at the time), Petersburg was a regular stop for peddlers, travelers, and even the occasional travelling circus. This and more can be found in the pages of this document.

An early entry in the diary shows how colorful a town Petersburg was. Loder’s diary reports that William Snyder, owner of the Petersburg Distillery, acquired an unusual pet. In April 16, 1857, there is this entry: “arrival of two barges of corn for Mr. Snyder; also a bear from Evansville”. Subsequent mentions of the bear are as follows: July 5, 1857 “Samuel Johnson's boy got his arm hurt and otherwise bruised by Mr. Snyder's bear”. August 21, 1857 “Mr. Snyder's bear got loose, bit his Negro girl, and ran half over the town. But he jumped over into Mrs. Snelling's yard where Perry McNeeley caught him then tied a long cable to the piece of chain that was to the bear and took him back to his box”. Dec. 24, 1857 “Mr. Snelling made Mr. Snyder kill his bear”. So ended the saga of the bear. This was not, however, the end of excitement and unusual sights in Petersburg.

From his home on Front Street, Loder could keep tabs on the river traffic. In the spring of 1859, he made several entries about what he called the “submarine boat”. Though early submersibles were being tested even before 1859, the vessel mentioned was a boat equipped with a diving bell. The inventor of the diving bell, engineer James Eads, went diving off the boat he called a “submarine” into the depths of the river to retrieve lost cargo. Loder recounts several steamboat accidents and collisions. Accordingly, the “submarine” business was quite busy during this time, and Petersburg residents had a premium view of the action.

Groups of “gypsy women”, a blind piano tuner, prize fights, horse races and hangings, along with life’s more predictable events are all included in the diary of Lewis Loder. The regular reports he wrote give all who read Loder’s diary a rare look at a surprisingly vibrant Petersburg.

Steamboats on the Ohio River