The year 1911 marked the earliest ever use of a motor vehicle in the commission of a crime, according to author Richard Parry in his book The Bonnot Gang. Brian Burrough, the author of Public Enemies: America's Greatest Crime Wave and the Birth of the FBI, gives the year 1915, for the first automobile used in an American bank robbery . There are many more examples, dating from 1909 forward, with similar claims. However, it’s possible that the first documented use of what we call a “getaway car” in a bank robbery may have occurred in our own Florence. 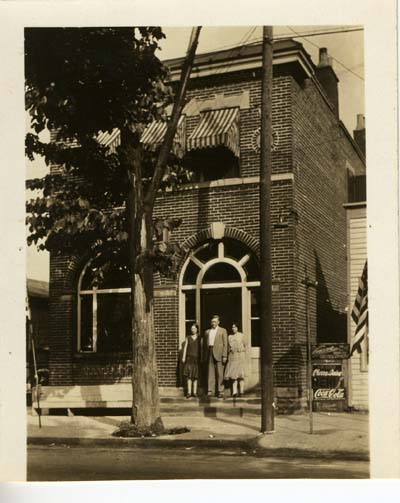 The Florence Deposit Bank opened for business in 1904, and was a successful endeavor by all accounts. The news of our growing community and its rapidly filling bank vault must have reached the ears of criminals in the area. On November 8, 1907, the “getaway car” may have made its debut in Florence, a dubious distinction.

At about 1:30 AM, on that November night, Miss Amanda Murray noticed a light in the bank and alerted her brother, James Murray, who was the Florence Postmaster. Murray quickly retrieved his weapon and roused the local priest, Father William Kathman, who also came armed to the scene. Suddenly, there was an audible explosion; adding urgency to the need to investigate the suspicious activity at the bank. Some news accounts describe a larger group of citizens, indicating others may have joined Murray and Fr. Kathman along the way.

Upon approaching the bank, the posse of concerned Florence residents were confronted with an unusual sight: a big red automobile. The first car arriving in Boone County was revealed in Burlington in 1901, but they were still quite rare locally, so this was something of an oddity to our citizens. This particular large vehicle was in the possession of some well-dressed rapscallions, with evil intentions for our little bank.

The group of would-be bank robbers, who numbered at around five or six, had used dynamite to blow a hole in the rear wall of the bank. Before they could crack the safe, however, the party of citizens arrived and the two groups exchanged fire. No one was wounded, and the bandits sped away, empty-handed. According to news reports, one man was called “Bill” by a fellow bandit, and one of the gentlemen wore a “silk opera hat” but they were never identified or apprehended. The Paducah Evening Sun of 9 November 1907, reported that they may also have attempted to hit the Petersburg bank, again unsuccessfully, before heading across the river to Cincinnati, in the first getaway car on record…..so far.