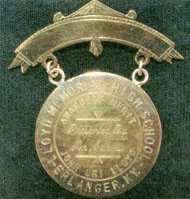 In 1929, a new high school evolved from the consolidation of the Erlanger and Elsmere school districts. The new school, Lloyd Memorial High School, was dedicated to Professor John Uri Lloyd, a well-known chemist and author of the book, “Stringtown on the Pike.”1) The corner stone was placed on Sunday September 23, 1928 and Professor Lloyd made the principal address.2)

In 1930, Mr. Lloyd and his wife set up a $1200.00 trust at the Atlas National Bank in Cincinnati, Ohio.3) The Bank would invest and reinvest all sums of the principal in the best interest of this trust. The trust states that, “beginning April 23, 1936 and annually, the balance of the income shall be paid to the Superintendent or Principal of LMHS of Erlanger to be used for the purchase and engraving of a medal each year, which will be awarded to a designated pupil of the high school under the following conditions:

A committee composed of the Superintendent, Principal, three teachers and the President of the PTA shall select the pupil.5) The medal shall have the following inscription; on one side, Lloyd Memorial High School, Erlanger, Kentucky, Reward of Merit, and Presented by Mr. and Mrs. John Uri Lloyd and on the reverse side; Awarded to (Name of Recipient) and beneath this For (giving the conditions of the award).6)

The Trustee also received five 10 K gold medals for the commencement exercises from 1931, through 1936.7) The Trust says that if LMHS ceasees to exist or changes its name, the Trust shall become void and the remaining funds shall revert to the donor or heirs. The Trust was signed October 16th, 1930 and witnessed by bank officials and John Uri Lloyd.

On several occasions, two students were considered qualified for the medal but the bank/trust stated that the committee needed to determine whom the one person would be.8) In 1999, this condition was altered to accommodate two brothers who were awarded the medal for saving the life of a drowning girl.9) The medal inscriptions have varied. Some of them read for “a heroic act, most worthy of recognition,”10) “Scholarship and School Loyalty,”11) “Scholarship and School Activities”12) and “Scholarship, Efficiency, and Service.”13)

In the following years the Gold Standard changed and the medals' monetary value increased substantially, costing more than the Trust could provide. In June of 1986, the Atlas Bank, now First National Bank of Cincinnati, issued a letter stating that the last funds for the Lloyd Medals were being sent and that the Trust Division was closing the books.14)

Subsequently, the last medal from the John Uri Lloyd Trust was presented in 1987. The following year, the Community Bank of Erlanger stepped forward to underwrite the cost of the Medals. They were purchased from the Gordon B. Miller Co., of Cincinnati at the cost of $224.27 for a gold medal and $4.00 for a box. Two medals with inscriptions were ordered for the 1988 and 1989 presentations.15) Since the Community Bank no longer exists, the School Board assumed the financial responsibility of funding the medals. For obvious reasons, they have opted for medals crafted from metals other than gold, but, nevertheless, the proud tradition lives on in the spirit of its founder, Professor John Uri Lloyd.