The Names in the Bell Tower

As I left the Post Office, Buddy Rice yelled at me from across the parking lot. I walked over and he explained that Matt Becher was looking for me.

“Who’s he?” I asked, and he replied that Matt was involved with Boone County’s Historic Preservation and wanted to talk about my having written my name in the bell tower of the old court house.

“I’ve never been there!” I countered, “And even if I had, why would I write my name up there?”

“Go see him anyway. His office is in the old court house.” And with that, Buddy drove off.

As I stood there puzzled, I felt my face flush as it had when I was nine years old and was sent to the principal’s office for carving JB’s initials in my desk. This time, however, my righteous indignation took charge, and I headed toward Becher’s office, determined to clear my good name. What’s he planning to do, I thought, charge me with desecrating an historic site! As I entered his office, he looked up.

“Yes.” he said, with some interest—you’re one of the few people left alive whose names are in the bell tower.?“

“Never been there!” I replied, quickly. 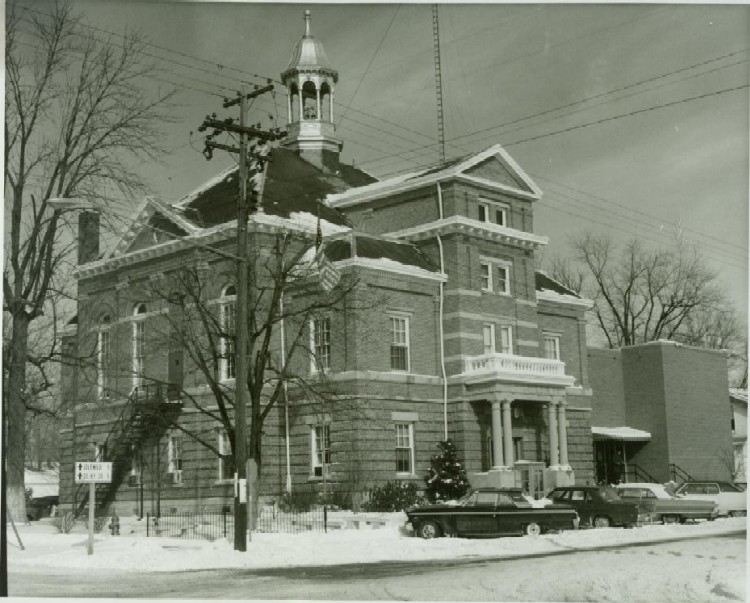 “Listen,” Becher said. “I’ve got some time now. How’d you like to see the tower?”

Not waiting for my answer, he guided my through the old courtroom, into what was at one time the Judge’s chambers and opened a small door. We began ascending an ancient staircase. With every step I took, I became increasingly disoriented, as the sounds and smells of long ago began insinuating themselves upon my consciousness; and as we stepped into the bell tower itself, a blast of cold air opened a flood gate of memories. I had been here before. I could hear the sounds of our laughter as my three friends and I climbed the stairs, some 59 years ago.

Peter Cropper was our guide, having been there often, no doubt shown the tower by his uncle, Judge Carrol Cropper, whose chambers incorporated the secret door to the tower. Gayle’s father, Irvin Rouse, who a few years earlier, had been a central figure in the Joan Kiger murder trial, had probably told him of it. Kay’s father, Courtney Kelly, in the 1940’s, was in charge of the local draft board and had an office not far from the Judge’s. Ray Holbrook and I knew nothing of the tower.

The dizziness from the rush of memories was so profound that I had to lean against the crumbling plaster; and as I looked up, my eyes automatically drifted to a spot in the center of the wall, about eight feet high. There it was—boldly written: HAROLD MCFARLAND—APRIL 7, 1951! Suddenly, I was aware of how I felt back then….

Matt’s voice interrupted my reverie: “Is that your signature, or not?”

Without answering Matt, I looked over at him and asked, “Why did you want to talk to me?”

Motioning to the wall, he said, “All of these names, many from the early 1900’s, are part of our history. Wouldn’t it be interesting to know who these people were and how they helped shape Boone County?”

“So you’re not going to charge me with defacing the tower?” I said, relieved.

“How could I do that? You and all the others here are linked through time for as long as this old building stands.”

I looked around at the names again. There was no indication that any of these folks had made a second visit to the tower as I had—so, impulsively, I pulled out my pen, with the idea of writing just below my signature, something to the effect that 59 years later, I had returned. I reached as high as I could but was not able to write comfortably. As I panned the room, hoping to locate a bench or chair, I saw Matt looking at me in a bemused fashion: “Want to stand on my shoulders?” he asked, laughing.

“No,” I said, “but I’ll be back!” And in that instant, I made my decision to return to the tower, April 7, 2011, on the 60th anniversary of my signature. And I would bring a ladder. Boone County history—or life has not seen the last of me!