History of the Infirmary System

For nearly 100 years, the Boone County Poor House which later became the Infirmary operated in Burlington. Those who fell on hard times and were unable to support themselves came to live in this institution, either on a temporary or permanent basis. In its earliest days, the infirmary was referred to as the county “Poor House”. This type of institution was not unique to our area; almshouses or poor houses were in place all over the country by the late 1800s. Our own facility for the poor was established sometime before 1860 and operated as such until 1969. The running of the tax-supported Infirmary was assigned to an appointed official, who was entrusted with the care of the inmates and facilities. We have unique insight into the day-to-day operations of the county Infirmary, which was recorded in a diary kept by Frank Rouse, who held the position of superintendent for over 20 years, beginning in 1911. Rouse’s journal describes the comings and goings of county inmates, as well as what went into maintaining the facility. 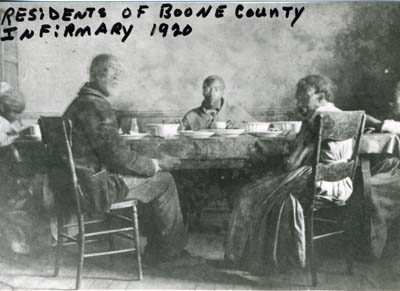 From the United States Census records from 1880-1940, we know that the infirmary residents ranged in age from infants to the elderly, and the facility was integrated. There were often children in the infirmary, sometimes as part of a displaced family, other times as orphaned wards of the county. There were occasions when abandoned infants were temporarily taken in at the infirmary.

Residents who were able would help with the day-to-day chores, according to Rouse’s diary. Some of the tasks performed included: tending the grape arbor and orchard, caring for the animals, performing repairs on the buildings and handling domestic chores. The infirmary housed an average of 10-20 inmates, according to census records, with the most populous year being 1910, with 32 residents.

The building which served as home for these county-supported residents was located on Idlewild Road, where the Children’s Home of Northern Kentucky’s Burlington campus now stands. The large frame house had 24 rooms and there were additional buildings on the property. Also on the grounds were the grape arbor and apple orchard, as well as practical outbuildings for the farm animals and equipment. Additionally, there once stood a “pest house”, a building used for quarantine of residents with highly contagious illnesses, such as small pox, typhus, cholera or tuberculosis. Many of the residents of the Infirmary and pest house were buried in a cemetery on the property.