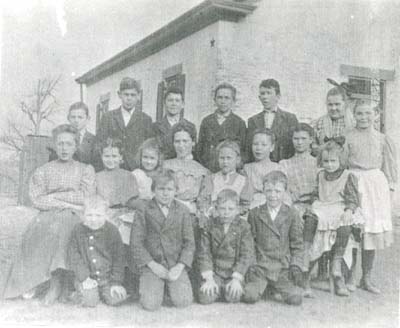 Located in Petersburg Precinct in hilly northwestern Boone County, Idlewild (formerly called Gainsville) lies in the valley of Ashby Fork Creek between Bullittsburg and Petersburg. The small village grew up at the junction of the Burlington-Petersburg Turnpike (present KY Route 20), one of the oldest roads in the county, and Idlewild Road (KY 338), which ran parallel to the creek. A tollhouse stood about one-quarter mile to the east.

As the name “Gainesville” suggests, much of the land around Idlewild was owned by the large and influential Gaines family, who built a series of imposing Greek Revival brick residences in the 1840s. Other prominent area residents include the Piatt, Kirtley, Terrill, Grant and Walton families, who farmed large estates along the Petersburg Turnpike.

Lake's 1883 atlas depicts three blacksmith shops and a general store clustered in the heart of Idlewild. During the early 20th century a school for African-American children was located there. One of several schools for black children in the county, it served ten pupils and provided bus service to students. The school presumably closed after school consolidation redrew district boundaries. Its location is now unknown.

The construction of Interstate 275 routed traffic away from the winding roads leading to Idlewild, leaving the heart of town all but abandoned. Today only scattered residences remain, along the turnpikes, ridges and creekbeds.