An Immodest Proposal: The Harrison/Moore Tragedy

Perhaps because a lady never gives her age, Mary Moore's date of birth changes between censuses–it's listed as 1833, 1836, and then 1850, a seventeen year difference! Her headstone, though, says she was born in 1831, and that she died in 1899. However, she would have died much sooner if it weren't for her “vigorous constitution” and her family's bravery. She could have died at the hands of the grandson of a former U.S. president, simply because she said no.

The Moores were a prominent family in Boone County. The 1883 altas shows that Major John H. Moore, Mary's father, had property in the Bullittsville precinct nearby the Ohio River, as well as the residence of William Henry Harrison, the grandson of the former president by the same name.

Prior to Tuesday, October 3rd, 1876, when the attack on Mary's life occurred, the Moores and Harrisons had a good relationship. The newspapers report that, Harrison's wife, Elvira Rogers, was the niece of John Moore's wife, Emily Rogers. Sadly, Elvira died in 1875, and she was buried in the Brown Cemetery in Boone County. Her death could have strained the relationship between the two families, but it certainly affected her husband deeply.

The Cincinnati Enquirer and Der Deutsche Correspondent, a German newspaper based in Baltimore, MD, report that Harrison allegedly saw apparitions of his wife's tombstone in the days leading up to the incident. This, in addition to financial troubles, might have contributed to his violent behavior that evening in 1876.

On the day in question, Major Moore left his home to visit family in Covington. William reportedly asked at the Moores' front door if the Major was home and later hid behind a haystack to watch for his return. Seeing that John Moore would not return that evening, Harrison returned to the Moore residence and spoke to Mary in the sitting room. 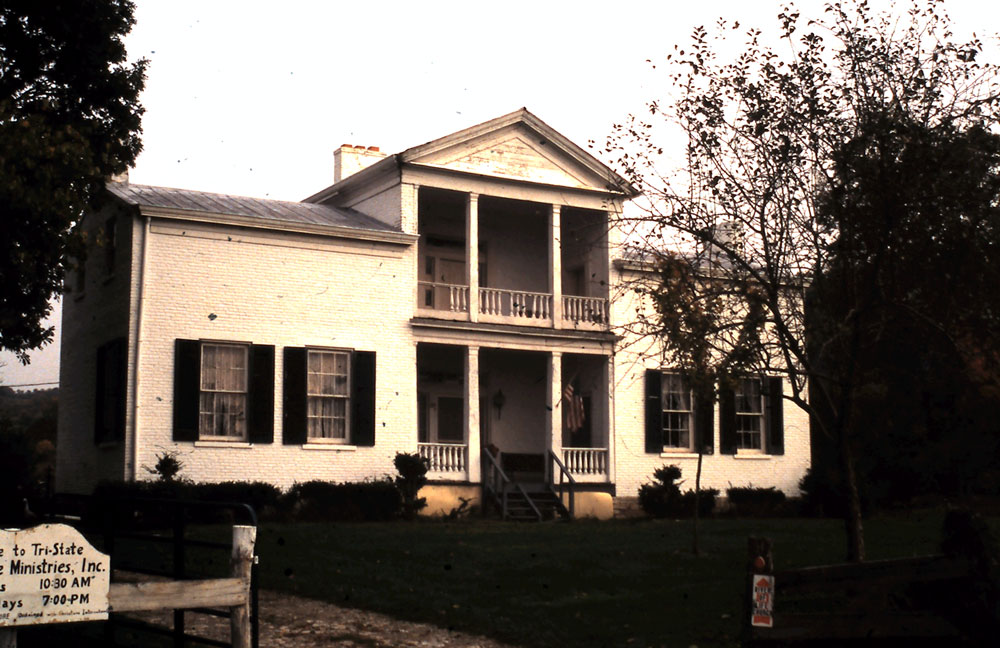 According to the Enquirer, Harrison had visited Mary quite often after his wife's death, so it was suspected that he had romantic intentions. The newspaper makes it very clear, though, that “Harrison had received no encouragement, and was never by word or look given to understand that his feelings were reciprocated.”

Harrison made a proposal of marriage, which Mary refused, as she wanted to spend her time taking care of her father, who at this time was approaching eighty years old.

Then Harrison brandished a knife and stabbed Mary over ten times, in the chest, cheek, and arm.

The Enquirer indicates that Mary was a tough woman with an “extraordinary vigorous constitution,” so she managed to escape from the sitting room to her brother's bedroom. William Moore, Mary's older brother, had suffered an accident when he was younger and did not have the use of his legs as a result. According to the Enquirer, he had heard the commotion and sent his attendant to find out to report back about what was going on, just before Mary burst through the door.

The identity of this attendant remains a mystery. The newspaper says the attendant was a young African American boy but gives no name. John Moore's will, written in 1875 (ten years before his death), mentions a “George Reed, a boy now about fourteen years of age,” who would inherit 200 dollars “if he remains with William until he is twenty one years of age and behaves in a prudent manner.” Could this be the same attendant with William the night of the stabbing?

The 1870 census lists a George W. Reed nearby the Moores, but he is 11 (making him 16 when the will was written and 17 the night of the crime) and white. A number of factors could explain these discrepancies, but for now, there is no way to know for certain who was with William that night.

Mary locked the door, and while Harrison waited outside, William took hold of his revolver and aimed it at the door. Harrison, afraid of William, and believing Mary was dead, instead went to the kitchen to find a gun of his own, intending to kill himself with it. The Enquirer reports that Harrison asked where to find a cap to make the rifle work, and William said to come in and he'd give him a cap. According to the Boone County Recorder a week later, however, William responded, “There are no caps here.”

Undeterred, Harrison rushed to his home, where he told his eldest son, Montgomery Pike, about his actions. He tried to shoot himself again, but like before, the gun had no cap. He then jumped into a cistern, but his sons fished him out. He attempted to poison himself before he was finally apprehended.

His attempt to drown himself in a cistern caused suspicion to one Enquirer reporter: “for had he been bent on suicide the Ohio River would have answered every purpose, and that was only a few rods away.”

Meanwhile, two doctors attended to Mary, who had lost a great deal of blood. All the newspapers indicate she was not expected to survive. In fact, Der Deutsche Correspondent closes the article saying Mary would most likely succumb to her wound that night. An article in The Courier-Journal after the trial, however, notes that “the unfortunate young lady is in a fair way to recover.”

On the day of his trial, Harrison claimed Mary had offered to lend him money for his financial troubles, which the reporter regards as evidence that Harrison truly was insane at the time, since he became unhinged after something positive. He also said he had “no recollection of the stabbing.” Most newspapers say Harrison was held in Burlington jail, but the Recorder says he was not in jail at all.

Nevertheless, he was declared a lunatic in court and sent to an asylum, either at Anchorage or Lexington (the newspapers differ). Apparently, however, he made a victorious return, showing up in Boone County on the 1880 census with his new wife (yes, you read that right), also named Mary. Mary Moore, on the other hand, never married. In her will, she left her property to her brother William, who helped save her life twenty years before. She and her father and brother are buried in Moore cemetery in Boone County.