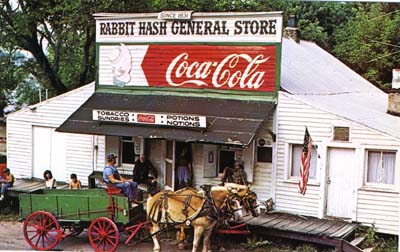 This year (2006) marks the 175th anniversary of the Rabbit Hash General Store. This historic milestone has even more meaning considering the fact that this continuously operated business remains alive and well in Boone County, Kentucky, the fastest growing of all 120 Kentucky counties. This designation does not bode well for the continued stewardship of one's past history and cultural heritage.

In 1831, 17 year-old James A. Wilson became the first proprietor of the General Store. The building itself was initially a co-operative endeavor of the local Grange, an early agricultural organization of local farmers and yeomen all across the United States of America, organized and nourished by Thomas Jefferson.

Initially the store was built as a warehouse to serve as a depository for local farmers' produce and products until the next down-bound steamboat stopped and loaded the goods for the down river trade. Reciprocally, off loaded goods would be stored there for the appropriate recipients to pick up and haul away. As the steam packet trade became more regular, the farmers had less need for a place to store their goods indefinitely, and the building better suited a mercantile purpose. Wilson also operated a ferry on the site, which continued until the ice of 1945 destroyed the last boat.

Not many places in Boone County can boast of a 175th anniversary. There are no local government buildings that old; no other businesses; no schools; very few private residences. A couple of county roads and a few native Boone County churches may qualify.

When Boone County celebrated its 175th anniversary in 1973, the only downside to this milestone was the fact that nobody knew what to call it. Every one remembered the Sesquicentennial (150th) and were looking forward to the Bicentennial (200th), but what is the 175th Anniversary called? There were no Latin words or names for this designation. Congratulatory letters from President Richard Nixon and Kentucky Governor Wendell Ford simply referred to it as Boone County's 175th Anniversary. Boone County Judge Executive Bruce Ferguson went the extra mile and declared his hope “that this Quinseptumcentennial” would “put a new emphasis on our history and especially the preservation of that history.”

To this day, there is no official word for a 175th Anniversary, although there have been attempts at coining one. A search of the literature of today provides two equally popular contenders: Terquasquicentennial and Septaquintaquinquecentennial. Neither one is genuinely accepted or embraced by linguists or scholars. All we know is that ancient Latin-speakers didn't care much for the quarter or the three-quarter of a century milestone, just the 50 and 100 marks.

So we're not going to get hung up on the proper terms either. Besides, in Rabbit Hash we go by dog years, which makes this our 1225th anniversary, or our Millenialquasquibicentennial. And that's what we're goin' with.