According to A.M. Yealey, salt and fur agents traveled the Ohio River and crossed at Rising Sun, Indiana via Meeks' Ferry from about 1816 to 1840.

Called Carlton when a post office was established in 1879, the little river town was renamed three months later to Rabbit Hash when no one was getting their mail. Carrollton, Carroll County, Kentucky was the source of confusion. The name of Rabbit Hash supposedly originated after a flood drove all of the rabbits to higher ground and the only thing to eat was rabbit hash. 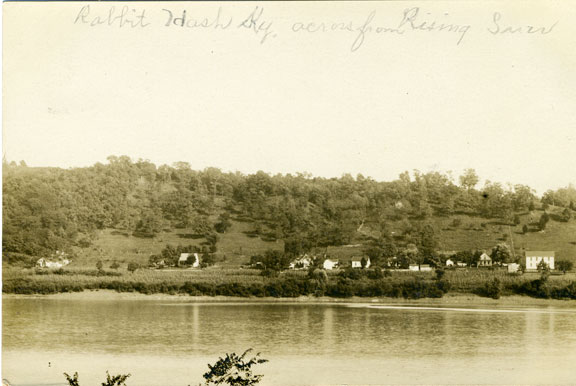 In 1998 the unincorporated community held an “election” for a new mayor. The event was a fundraiser for historic preservation of the river town. Each vote cost one dollar. The canine mayors of Rabbit Hash have included: Goofy; Junior, a large black dog; after Junior's passing in 2008, a red and white border collie named Lucy Lou; and the current mayor, an American pit bull terrier named, Brynn (short for Brynneth Pawltro-Bamforth).

The most famous building in town is the Rabbit Hash General Store, a well-known destination for those who tour small town Americana. The Rabbit Hash Historic District was added to the National Register in 2003.