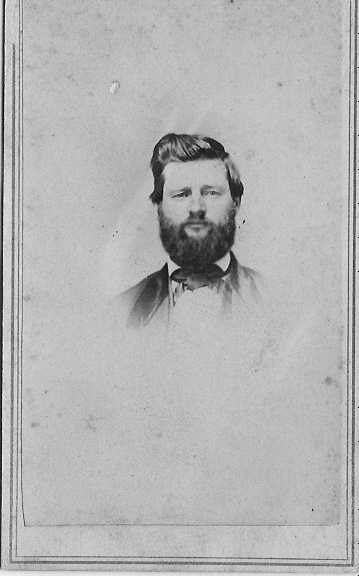 George W. Terrill was born in Petersburg on July 18, 1828, the eldest son of John and Nancy Terrill. George married Miss Amanda Malvina Walton, in Mason County in 1847. They had 10 children together.

Amanda passed away in 1884, of heart disease. George was married a second time in 1887, at the age of 64, to a local widow of similar years, Mrs. Ann McComus (nee Huff). They enjoyed seven years as a married couple until George’s death in 1894.

During the Civil War, he served the Confederacy as a Captain in the 5th KY cavalry, under the command of Gen. John Hunt Morgan. Also serving in the same regiment were his brothers Joshua and Simeon Terrill, as well as cousins and at least one nephew. George’s two remaining brothers, Dr. William H. Terrill and Robert Q. Terrill, were both officers in the Union forces.

Cpt. Terrill's resignation was accepted by General Smith and Brig. General Morgan in May 1863 due to poor health. However, he was taken prisoner at Adams Mills, OH only two months after his resignation. Terrill was sent to Camp Chase, in Columbus OH. His brother, Union officer Robert Q. Terrill, had been stationed at Camp Chase only months before.

Cpt. George Terrill signed an oath to the Union and was released by $5000 bond (which was delivered by his father John Terrill) in August of 1863. He was still suffering poor health at his release.

George Terrill was elected to the state senate, representing Boone County from 1869 to 1870. He is buried with other Terrill family members in Petersburg.