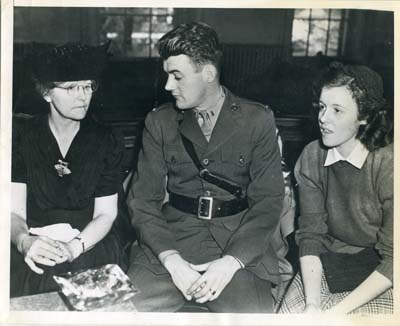 In Boone County, Kentucky, the Kiger Family is most well known for the events that took place on August 17th, 1943 at Rosegate Farm. Nearly seventy years and several news articles, a book and two plays later, speculation and controversy still swirl around the night Carl Kiger and his six year old son, Jerry died. At the center of that notorious night was Carl’s fifteen year old daughter, Joan, who was later placed on trial for the shooting deaths of both Carl and Jerry.

On that fateful Tuesday night, Carl and his wife Jennie, along with their two youngest children Joan and Jerry were asleep in their beds when someone shot and killed both Carl and Jerry, wounding Jennie in the hip. Joan, unharmed, drove the family car to the neighbors to get help. When Boone County Sheriff Jake Williams arrived at the scene, the house was full of both Kenton and Grant County officials. According to officials at the scene, the house was locked up tight with no evidence of intruders.

Carl Kiger was considered a suspicious man and kept three pistols in the house- two downstairs in his study and one in his upstairs bedroom, under his pillow. He insisted all the doors and windows of Rosegate were kept shut and locked at night- even in the heat of summer. Why was Carl Kiger so paranoid about his family’s safety? No one knows for certain. However, rumors have alluded to Kiger’s mob connections as Vice-Mayor of Covington. After the deaths, $1440 in cash was found in the house, speculated to be slot-machine pay off money.

On December 14th, 1943 the Boone County Grand Jury indicted both Joan and Jennie Kiger for the willful murder of Carl and Jerry Kiger. The case was brought to trial in the Burlington Court House on December 16, 1943. Joan, now 16, was tried as an adult for the death of little Jerry; her mother to stand trial later. Although a motive was still debated, Prosecuting Attorney Vincent sought the death penalty. Joan was defended by prominent attorney Sawyer A. Smith. Judge Ward Jager presided over the five day trial.

During the trial, Joan’s tendency towards night terrors- very intense and seemingly real nightmares- was brought to light. Apparently, Joan inherited the affliction from her father. The theory was that Joan thought she heard gun shots in the house and was defending against an intruder. Experts were brought in to testify whether or not gun shots would have awoken Joan from a dream state. Joan testified that she fired at shadowy figures that she thought were shooting at her. It was shown that the gun that was used to kill Jerry Joan gave to Jennie before leaving the house. Schiffer states, “the defense hinged on whether the jury would buy into Smith’s defense that Joan was not in her right mind when she did the shooting and therefore not responsible.” After a four hour deliberation, the jury found no proven motives for the murder of Jerry Kiger. The twelve Boone County men, found Joan Kiger not guilty. As a result of the not guilty verdict, the prosecution dropped all charges against both Joan and her mother. Without the first conviction, there was no motivation to try the other cases.

In 1943, it was hard to conceive that a “nice girl” would kill her family. Carl Kiger’s alleged political connections led to speculation that the Mob killed Kiger and set Joan up as the scapegoat for the murders. In the years that have followed the trial, the community has remained divided about Joan’s role in her father and brother’s deaths. Fellow students have remained adamant that Joan would not have knowingly killed her family. Others firmly believe that Joan was not as innocent as she seemed and that she got away with murder. In Boone County, the murders and subsequent trial remain one of the most discussed single events in Boone County history. Regardless of motives or guilty parties, one fact remains constant; the Kiger Family was destroyed that night in August of 1943.

Joan Marie Kiger changed her name to Marie Kiler and graduated from the University of Louisville with a degree in education. According to Thomas Schiffer (2012), she was employed by the Jefferson County, Kentucky public school system, where she was a guidance counselor. Her death certificate states that Marie Kiler died of cirrhosis of the liver in April 1991 at the age of 64 and she donated her body to the University of Louisville.

Note: Built in the nineteenth century, Rosegate Farm with its 20 acres was located in the little town of Devon, along Dixie Highway just south of Florence, Kentucky. The large two-story house was demolished in 2005.