Most of what is known about Mary Ingles' escape from Indian captivity comes from a narrative account of the Ingles Family written by Mary's son, Col. John Ingles, about a decade after her death. Since Mary probably could not write, the narrative may be regarded as a first-person account; especially since she often recounted her experiences to John and her other children, as well as her grandchildren. 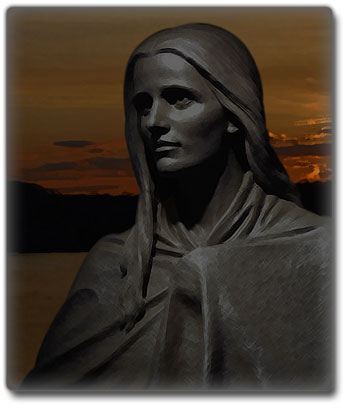 Mary Draper was 18 years old when she married 21-year-old William Ingles in 1750. They set up housekeeping near their parents in a place called Draper's Meadows, a settlement of 10 people, in Augusta County, Virginia.

When the Ingles and Drapers came to Augusta County, relations with the Indians were relatively peaceful. John Ingles tells us that the Shawnee, from north of the Ohio River, would pass by Draper's Meadows in their raids against the Catawbas to the South, but at that time there were only a few incidents on the Virginia frontier. This was soon to change.

On Wednesday the 30th of July, 1755, the Shawnee attacked Draper's Meadows, killing or capturing most of the inhabitants. The prisoners included Mary Ingles (here called English), her two children, Thomas and George, and her sister-in-law, Bettie. William, Mary's husband, was away at the time and was not captured.

After the capture, the Shawnee took their prisoners to the Shawnee town of Sonnontio. On the journey, Mary was allowed to roam the woods and had numerous opportunities to escape, “but could not think of leaving her children.”

When they reached the town, Mary was separated from her sons who were adopted into the tribe. Mary was set to work, initially making clothes. Some weeks later she was taken to Big Bone Lick, more than 100 miles further west, to help make salt – a grueling task in the mid-summer heat. Sometime about the 19th of October, Mary decided to escape from Big Bone. John Ingles gives the following reason for her decision:

“My mother, being so distressed in being separated from her children and her situation such a disagreeable one that she came to the determined resolution that she would leave them and try to get home, or die in the woods, and prevailed upon an old Dutch woman that was there and a prisoner too, to engage with her in the seemingly hopeless and daring attempt.”1)

Preparations were short. The narrative states that they had between them a blanket and tomahawk each, “and perhaps a knife,” and that they started late in the day. Apparently escape from Big Bone Lick was considered so unlikely that there was no direct surveillance of the captives. Since they could roam at will, they left the camp in the most natural manner possible.

Although it's not certain, it seems most likely that they headed immediately for the mouth of Landing Creek, the closest access to the Ohio River and the first of the 145 creeks and rivers they would have to cross on their way to the mouth of the Kanawha River, 250 miles up the Ohio.

According to the narrative, they survived on “black walnuts, grapes, pawpaws, etc.”2) and that often they were so hungry they would “dig up roots and eat that they knew nothing of.” A letter from an unnamed correspondent, written from Augusta County and printed in the newspaper after their return, says that once they came upon an Indian skinning a deer; his dog barked at them, and the Indian fled as soon as he secured the hide. They were able to eat their fill of meat, and carry some with them to eat later.

They probably reached the Kanawha, a little more than half of their journey, around the 7th of November. From there, it was 95 miles and 46 streams to the Falls of Kanawha, and then up the New River for an additional 85 to 90 miles of the most rugged and difficult terrain they had to pass. The entire journey took 42 and a half days. They arrived home near the first of December, surviving incredible hardships.

After her journey, Mary lived a long and healthy life, and had several more children, dying in 1815 at the age of 82 or 83.