The town of Hebron was founded in the mid-19th century, though the exact date is unknown. During its early days it was variously known as Briar Thicket, Briar Patch or Tailholt – all names whose origins are equally unknown. The town grew up along the Tanner's Station-Newport Road, now known as the Petersburg Road or KY Route 20. Like many other inland towns in the county, Hebron was a quiet farming community and agricultural trading center that served the surrounding area. A post office was established on February 23, 1858, and the town took the name of Hebron in honor of the local Hebron Lutheran Church with which the town's early history is intertwined. 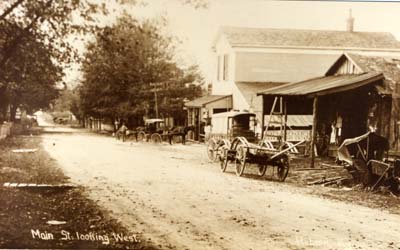 Hebron remained a small farming community until the 1940s. The development of a new Cincinnati airfield on high, level land east of the town led to the removal of houses and farms to make room for runways. In the years following World War II many people seeking suburban lifestyles, built homes in and around Hebron.

As suburbanization proceeded in the late 20th century, it brought rapid change to the Hebron area. The construction of Interstate 275 and the widening and relocation of North Bend Road improved access to Hebron and made it an attractive location for residential and business development. Farmland gave way to residential subdivisions, warehouses, factories and shopping centers.