Early years. The ninth child of Thomas Roberts and Rozanna Odell Roberts, Thomas Zane Roberts was born on October 4, 1851, in his parents’ frame house on Middle Creek. The Roberts family, originally from New Jersey, was related to Zane Grey, famed author of Western novels. The 1870 U.S. Federal Population Census reveals that Roberts' father, also Thomas Roberts, was 64 years old at the time, and born in New York State; his Mother, Rozanna Odell Roberts, age 57, was born in Maine. The enumerator also listed sons John O., 27, and Thomas Z., 18, both of whom worked on the farm. The family also included daughters Ella, 14, and Isabelle, 16. Thomas Zane Roberts was the family’s 9th child.

Farmer, miller, builder. Under the tutelage of his father, a skilled woodworker, young Thomas learned the trades of carpentry, farming and milling. He attended the Locust Grove country school, then at age 22 enrolled in the Morgan Academy, a private school in Burlington. He then began farming on his own account and in 1874 bought 16 acres of land from his father. He also joined the local Grange and in 1875 was elected its secretary.

After the death of his father in 1876, Roberts worked full-time at the farming and milling trades to support his mother. According to Boone County deed records, Roberts acquired his farmland through a series of eight transactions over a period of years, in small increments. Roberts ran a diversified and progressive farming operation, and would either sell corn and wheat by the bushel or grind and sell the meal.

“Roberts grew many commodities on his farm including tobacco, corn, wheat, grapes and potatoes. He grafted and planted apple trees over the years on his farm. At the time of his death he maintained two separate orchards…. Roberts also maintained beehives…. He made his own beehives and sold beehives that he had made. Most of his income from farming came from the products of tobacco, corn and wheat.” (Frohlich 2008: 99)

Like his father, the master builder, “Roberts developed into a master craftsman whose services were also sought after over the years” (Frohlich 2008: 94). He assisted with the construction of the Belleview Baptist Church (BE-7) and built at least three houses in addition to his own, as well as many barns, fences and farm buildings.

Teacher and writer. While on the farm, Roberts sharpened his intellectual skills by attending educational lectures and debates, and in 1877 organized a literary society at the Locust Grove country schoolhouse. He began writing poetry and stories for new Boone County Recorder under the pen name “Zane.” Roberts took up astronomy and purchased a telescope to study the skies. He also became a justice of the peace. The book where he recorded his transactions also contains articles on science, astronomy, mathematics and poetry, but it is not known if any are his work.

In the 1870s Roberts turned to teaching as a profession and in 1878 received his teaching certificate. Roberts secured a position as a schoolmaster at Locust Grove, where he taught 17 students of various ages. He then taught at the Cason schoolhouse, near East Bend Road (now Kentucky Route 338), and in eastern Boone County at Frogtown. Between 1882 and 1885 his career was temporarily interrupted, possibly by an injury that occurred while chopping wood.

In 1885 Roberts resumed teaching and renewed his social ties, returning to the Cason School for several terms over the next 14 years. Roberts eventually earned the title “professor” and was elected repeatedly to the four-person executive committee at the Teachers Institute held annually in Burlington. An accomplished singer and lover of music, Roberts also taught a vocal music class in the western Boone County river community of Belleview, and at a singing school in Big Bone in southern Boone County. In 1891 he was elected president of the Beech Grove Debate Society. For a time Roberts taught in the town of Hebron in northern Boone County, where he boarded with a family in town. Following a final engagement at Beech Grove School, Roberts retired from teaching in 1902. “Roberts then became more involved in the pursuits that led him to design the monumental clock that is his legacy” (Frohlich and Becher 2009: 763).

Inventor. Despite the local fame he garnered from his teaching career, Roberts is best known for his inventions. His house, built in 1900, became a showplace for these devices, including the two-tier paneled ceiling in his bedroom, and a swinging bed suspended from the ceiling so he could rock himself to sleep. Roberts designed a fireplace vented with outdoor air; cast into the vent cover, which could be opened or closed to regulate airflow, was the legend, “Don’t I Blow.” By adjusting the vent, it acted as a blower, and the result was a very hot fire with no smoke. The dining room and kitchen could be divided by swinging partitions.

Roberts also devised a piping system to bring water to his home from a spring on the nearby cliffs, and a conveyor to carry tobacco and hay from hilltop fields directly to the mill/barn. The tobacco field was on one side of Middle Creek, and the barn was on the other at a distance of about six hundred feet. Roberts would place the tobacco on the pulley system near the tobacco field, and its own weight would carry the tobacco from the field to the barn (Frohlich 2008: 115). It does not appear that any of these inventions was ever patented or introduced commercially. 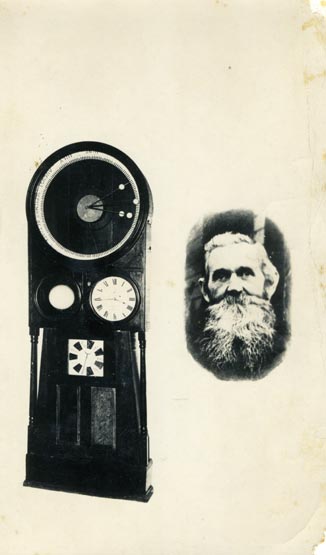 Celestial clock. Roberts is most famous for a remarkable celestial clock, famed as the “Clock of Middle Creek.” The grandfather-style clock, standing seven feet tall, was built by Roberts of walnut cut on the farm, using hand tools. The wood was carefully chosen by Roberts “for its intrinsic value as well as its extrinsic beauty. Some came from furniture in his home or from particular places on the farm. Roberts could recite a story about each piece in the wood casement” (Frohlich 2008: 18).

The clock includes a Seth Thomas timepiece, a planetarium, a lunarium, and a dial showing the days of the week; the clockworks provides motive power for all the other functions. The planetarium contains an abbreviated model of the solar system, built to scale, and shows the earth’s position relative to Jupiter, Mars and Venus. “The orbit of each planet is precisely geared: while Venus gains one degree of arc in 1,656 days, Jupiter loses one degree of arc over 250 years” (Frohlich and Becher 2009: 763). The lunarium depicts the moon phase, and a dial indicates diurnal and nocturnal hours. The clock features an eight-day spring motor that sounds an alarm as it turns low and keeps ringing until attended to. Roberts built the clock in the frame workshop beside the house that is still standing and is included in the nomination boundary.

“In 1909 Roberts discontinued most of his other pursuits to devote himself to the Clock of Middle Creek” (Frohlich and Becher 2009: 763). He is believed to have completed it a year later. Many colorful legends, most of which have not been substantiated, surround the construction of the timepiece. One legend states he built the clock so he would always be reminded of the day and time of church services. Roberts built a smaller calendar clock in the 1880s and probably built the celestial clock as an improvement upon the earlier one. Another legend holds that he built a lookout tower behind his house, equipped with a powerful telescope, and studied the heavens for a year to make the necessary calculations. “In fact, he had begun working with clocks in 1882; the only time he ever forgot about Sunday church was in 1883” (ibid.). More recent research suggests that he built the clock as an intellectual challenge. Regardless of the reason, Roberts continued to work on and perfect the clock throughout his lifetime.

Roberts also hoped to build an even more ambitious clock, with a striking mechanism, but those plans never came to fulfillment. “Josephine Cason [wife of Roberts' nephew] wrote that Roberts was not satisfied with the clock, and at his death was working on a clock 'he said was more perfect than the first one'” (Frohlich 2008: 18).

In addition to better-known inventions such as the clock and the bed, Roberts designed and built a remarkable array of tools, devices, instruments and machines. These included ice skates, a square fiddle, a violin and flute, croquet balls, a money box, a wind engine, a shingle-making machine, a jigsaw, a forge, wheel spokes, pulley blocks, plows, wheelbarrows and washing machines (ibid). Later years. Roberts died on January 15, 1925 and is buried in the Burlington International Order of Odd Fellows Cemetery. After his uncle's death, nephew Ralph Z. Cason inherited the farm and for the next 50 years kept his uncle's inventions intact. Cason was offered the chance to display his uncle's greatest invention at a World’s Fair but refused, fearing the clock would be damaged. He also was offered $1,000 for the clock but turned down the offer.

Cason welcomed visitors from all over the world, including Swiss watch and clock makers, who traveled to Middle Creek to see the famous clock.

“Cason had an open door policy at the Middle Creek home. Visitors were always welcome to come and see the clock and the home. There were annual school trips to the home from around the area schools. People came from all over the U.S. and the world to see the clock, and Cason began a visitors log on June 24, 1934, which he kept until his death (Frohlich 2008: 133).

After Cason's death, the clock was displayed in the science building of Northern Kentucky University. It is now preserved in a bank in Burlington, enclosed in a walnut case and wound twice a week.